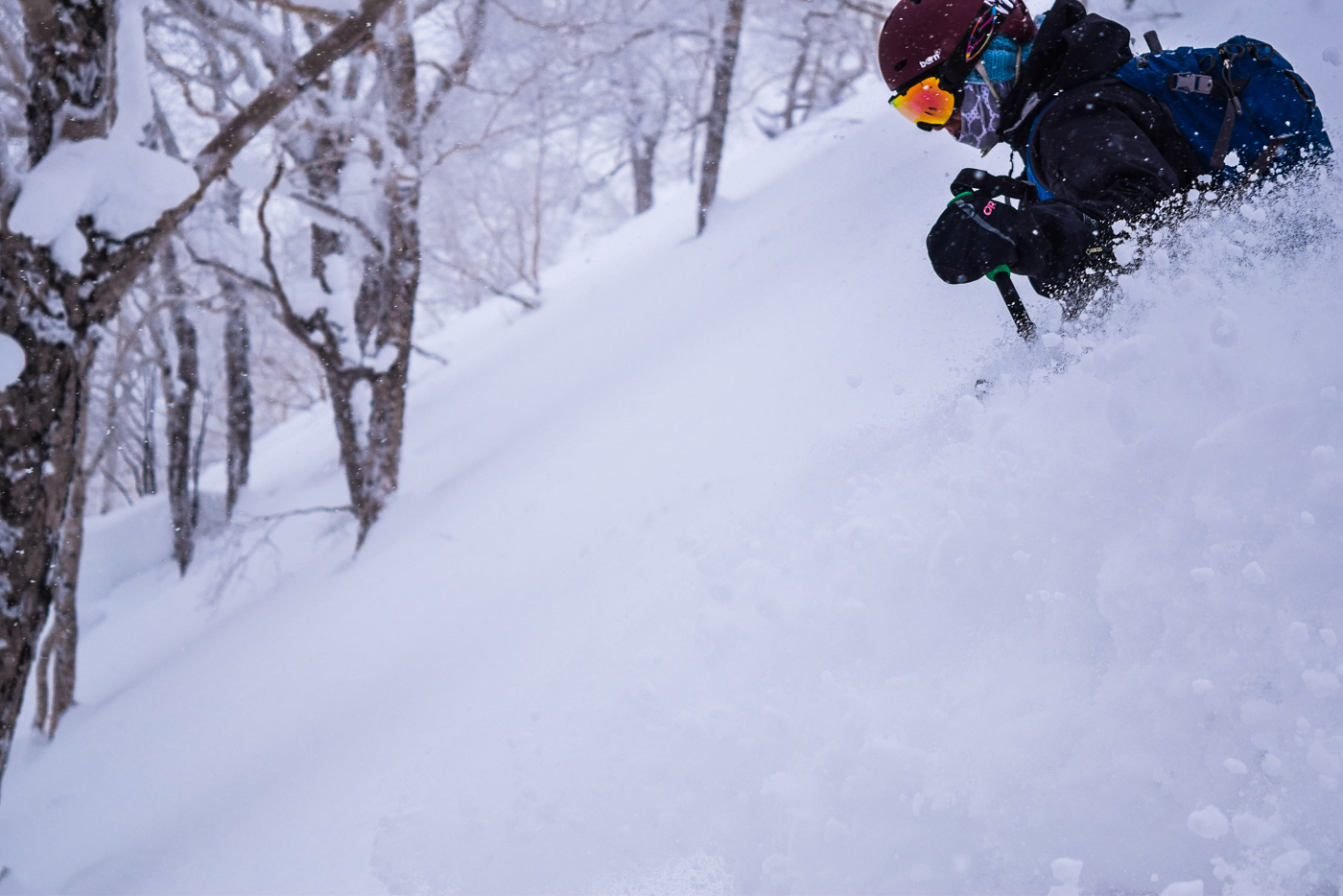 “Life is a series of natural and spontaneous changes. Don’t resist them – that only creates sorrow. Let reality be reality. Let things flow naturally forward in whatever way they like.”

The next stop on our Hokkaido adventure took us north and east on the island to Asahidake. This was the spot I was looking most forward to here in Japan and I was pumped! Unfortunately it did NOT appear as though the weather was going to be agreeable…

Asahidake really is a unique ‘resort’ for skiing and snowboarding. The ropeway, or tram, was developed for summer hikers and volcano enthusiasts to view Hokkaido’s tallest peak, Asahidake or Mount Asahi that stands at 2,291 meters, or 7,516 feet in height.  Mount Asahi lies within Hokkaido’s Daisetsuzan Volcanic Group of the Ishikari Mountains and is located in the northern portion of the Daisetsuzan National Park. Being that the tram was designed for summer use, there are very few groomers or runs cut through the trees descending from its top terminal. For this reason this has become a favorite location for those willing to add some backcountry ski touring to the summit of the tram for the real peaks and powder snow. There is no ski patrol here and the nearest town is a bit of drive away, so it goes without saying that this place is a little off the grid. It is supposedly known for the gorgeous views of the peaks and the clear reflections in the lake that lies below… Well, we never saw any mountains or lakes while we were here… mainly just wind and snow!

We had arranged a guide for our first day in the area since this place had a reputation for being tricky to ski without knowing where you’re going. As we met the guide on our first morning the winds were threatening to shut down the tram, it had warmed in the previous days and now had a dusting of cold snow on the firm. Our guide honestly told us it would likely be a pretty poor day of skiing and not to pleasant to be outside. I was so excited to have finally made it to Asahidake, I asked him “Is there anywhere you think it’s good?”, “Yeah, Lake Tahoe.”, he said – not yet knowing where we were from!

As it turned out both Pat and his back up guide, Sammy were invaluable to us finding our way around the mountain in high winds and no visibility. Blowing snow continued to fill into gullies and later in the day we found ourselves skiing deep deposits of cold light snow.

We really enjoyed the opportunity to ski with Pat and Sammy with Hokkaido Outdoor Adventures. Pat’s deep knowledge and passion for the area was evident and he continued to email me his thoughts on the weather and where it would be good through the rest of our time in Hokkaido.  We had a great day with HOA and couldn’t more highly recommend Pat and Hokkaido Outdoor Adventures  to show any group around these peaks.

By the end of our stormy day spent enduring the winds, we were rewarded with waist deep, light, wind loaded powder. It kept up snowing all night and we awoke to the deepest powder day of our trip! 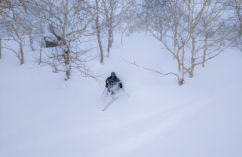 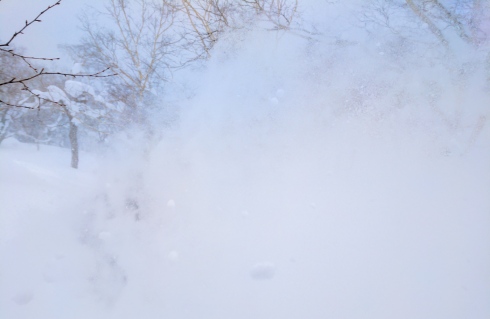 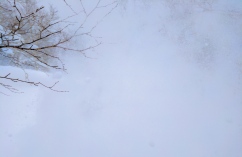 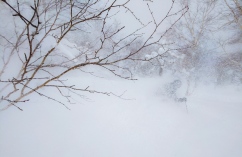 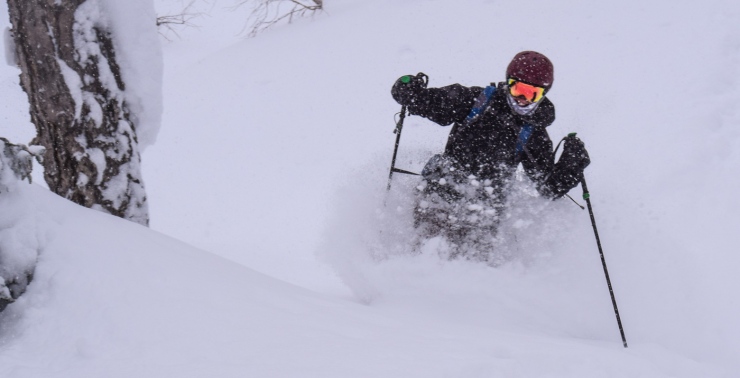 These two days really involved going with the flow and being open to whatever kind of weather, snow and travel we were dealt. The warming the day before, high winds, no visibility, and little snow actually forecast looked like a death sentence for more powder over the next week, or so – as our guide told us that morning. Thankfully, the storm was upgraded, the snow continued to fall, and what was supposed to only be a few centimeters of light dust on crust turned into face shots and over head powder! Just as I laughed and wrapped my head around, “well, maybe the rest of this trip will be more about sushi and onsens”… the skies opened up and we were granted some deep Japow! 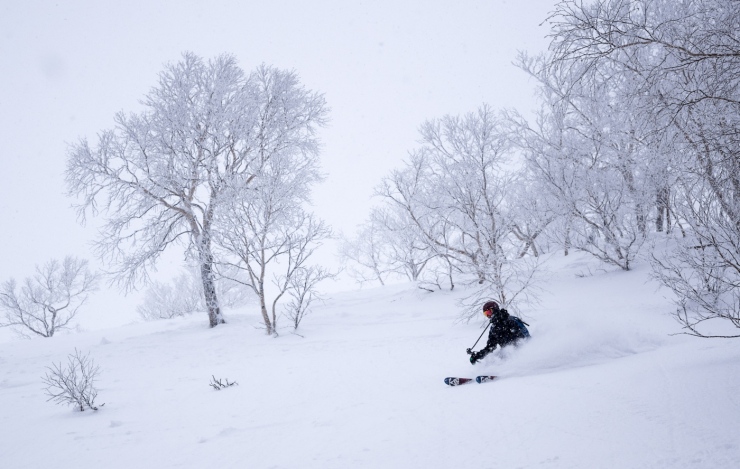 We were planning to head off to a backcountry-only zone Pat had recommended as we were leaving Asahidake but thought we might do best finding some chair-lift skiing to really get the most out of the fresh snow that had unexpectedly piled up. We had heard good things about the steeper skiing and good terrain at Furano and booked a room there for our next stop along the way.

Lindsay’s legs were sore from ski boot hot spots and went in to the lodge to rent a snowboard. Meanwhile, I followed some tracks (I know, I know…) down a deep drainage off the summit skiing incredible snow in beautiful steep forest; then found some flustered guys in thigh deep powder wondering how to get back to the resort. I took out my GPS and showed them where they were on the map. They didn’t speak much english but I did my best to explain that I would tell ski patrol where they were. I put on my skins and climbed back up to the ski resort; then I went down to ski patrol and showed them on a map where I found the guys and they were headed out to find them! The turns were amazing back there….. 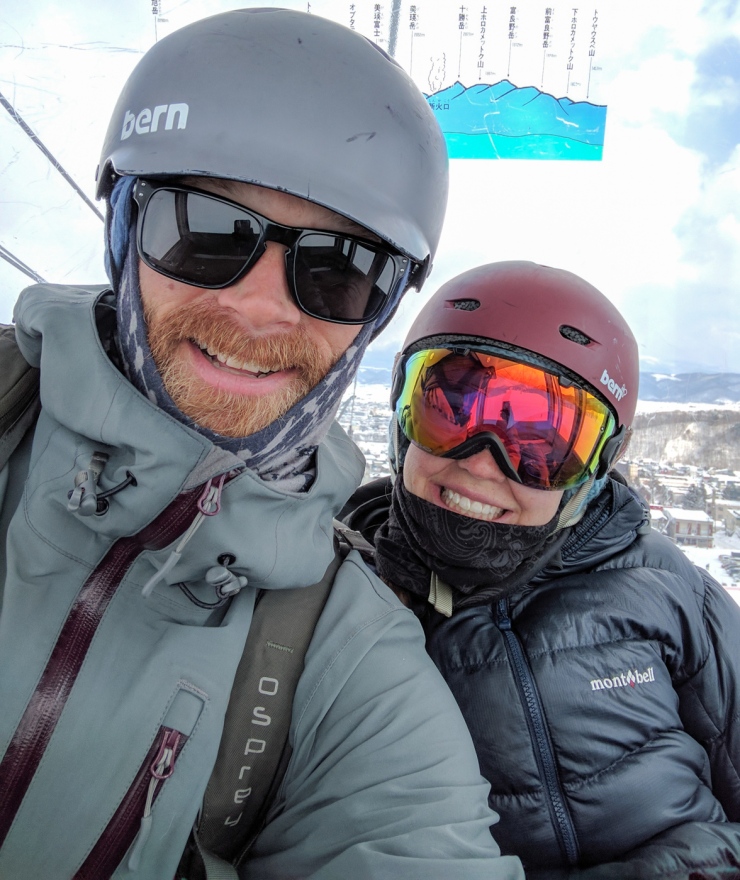 Next post will be from Tokachidake! My favorite stop along the way! Stay tuned…

WATCH: Why Copenhagen Put A Ski Slope On Top Of A Power Plant

Join 253 other subscribers
Follow Many Steps Make Mountains on WordPress.com